On the morning of Friday 13 July 2018, WBM Groundworks Ltd were continuing excavation works along Vivid Approach when the excavator driver noticed an object within the machine bucket and excavated arising’s, at first glance the object appeared to be an old, rusty, metal pipe, but at second sight the driver then quickly realised that the object within his machine bucket was not the usual type of rusted metal item and bought the machine to a stop, calling his ganger man over for a closer a look.

The Groundwork team quickly reported the findings to the Balfour Beatty Site Office and General Foreman Matt Whitwood attended the location and confirmed that the object discovered appeared to be a piece of Unexploded Ordnance (UXO).

The area was closed down ensuring no vehicles could drive past in either direction, all members of the public and other operatives/sub-contractors, local residents and stakeholders were informed of the discovery and were advised to re-locate to a safe area away from the discovery.

The project manager Andrew Shalgosky contacted the MoD. Janice Waters Head of Security then contacted the Royal Naval Bomb Disposal First Responder who attended site within minutes and confirmed that the discovery was an Unexploded Bomb from World War 2.

The Emergency Services and Bomb Disposal Team were contacted and within minutes Devon & Cornwall Police arrived on the scene and took control of the area. All members of the project team were evacuated from the work site and all stakeholders and local residents were also evacuated and a 100m cordon was established.

Shortly after arriving on the scene, the Royal Naval Bomb Disposal Team confirmed the suspected UXO was in fact a 3″Mortar from World War 2.

The Royal Naval Bomb Disposal Team cleared the UXO from the site and the emergency services began to collapse the 100m cordon and inform everyone involved that the area was safe to return to.

The MoD, Emergency Services and Royal Naval Bomb Disposal Team were very complimentary towards Balfour Beatty and WBM in the way the situation was handled and were extremely pleased with how the site team took control of the area and carried out the emergency procedure to the letter. 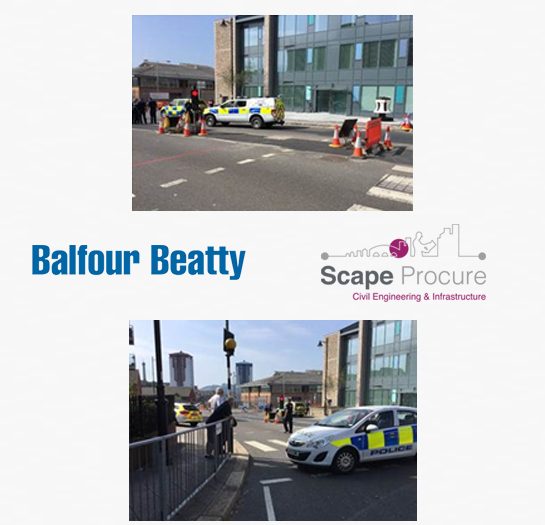