We would like to start by congratulating the Midas Group, who won the construction contract for Phase 1. Alan Hope, Chief Executive of the Midas Group, said: “South Yard is one of the region’s most significant regeneration projects and Midas is delighted to be delivering the first phase on behalf of Plymouth City Council. This employment-led scheme will create a sought-after business environment which is in keeping with the architectural history of the Yard.”

Council Leader Ian Bowyer dug the first turf to mark the start of the Phase 1 build of the country’s first Marine Enterprise Zone, which forms a key part of Plymouth’s plans to grow its flourishing marine sector.

The first phase entails the construction of two and three-storey buildings at the entrance of what will become a Marine Industries Production Campus in Devonport.

Designed to be flexible for industrial as well as office and workshop space, the buildings have been arranged to reflect the historic nature of South Yard as well as the street pattern just outside the boundaries. The buildings are of a high quality using a number of natural materials such as limestone and meet the highest environmental standards.

The £7.7m project – which is being funded by the Council, Heart of the South West Local Enterprise Partnership and ERDF – offers flexible office space with potential for use as design suites, testing labs, training rooms for technology development and prototype production spaces as well as workshops for research, engineering and manufacturing.

There will also be 32 parking spaces for the office block and 28 spaces for the area around the industrial units. Landscaping is also planned, including moving the historic capstan which used to haul the ships into the docks to the front of the site to celebrate the site’s maritime heritage.

Phase 1 aims to attract businesses involved in marine innovation and will have access to deep water. It will see the creation of 1,140 m2 of office space and 1,293 m2 of light industrial space arranged as two terraces. Negotiations are well underway to develop a Marine Business Technology Centre that will be part of this Phase 1 development. 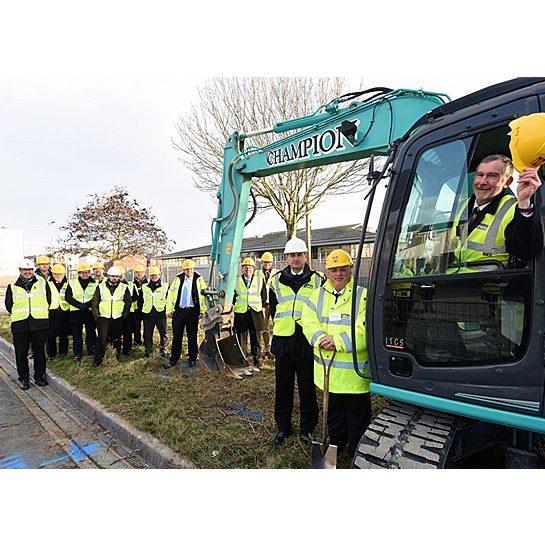